Powerful, athletic and already manifesting that a truly great stallion is about to mature. Everything about Dibadu L is just perfect: his attitude, his unlimited ability, his already mature technique and careful manner, rounded off by genetics which are extremely rare in this top performance combination. This was shown at his 30-day stallion performance test which he finished in second place in Münster-Handorf with a mark of 8,03. For his free jumping he was given a 9,0.

In 2013 he was winning several young horse competitions at novice/A level with marks of up to 8,8. In 2014, he did the same at elementary and intermediate (L and M level) with exceptional rounds. Already at the beginning of the competition season, he qualified in Kirchhellen for the ´Bundeschampionat` of the 5-year old show jumpers. His foals are characterised by an extreme sportiveness with a lot of movement and a beautiful type.

Dibadu L’s sire, Darco, is the highest-ranking sire in the WBFSH ranking of the world’s top jumping sires – (World Breeding Federation for Sporthorses) well ahead of the competition. With Ludo Philippaerts/BEL, he was placed at Grand Prix, Nations Cup and World Cup competitions. His great grand sire was the renowned thoroughbred Der Löwe xx. By his breeding association BWP, he was awarded the prestigious title of ´Ambassador`. Darco produced absolute top star jumpers, such as Sapphire/McLain Ward/USA, Valentina vd Heide/Jos Lansink/BEL, Winningmood/Luciana Diniz/POR and Parco/Ludo Philippaerts etc.

His award-winning dam, Elle Chin P&B, produced the stallion, Herr Sandro P&B (sired by Sandro Boy), licensed and successful in Belgium. The dam sire, Chin Chin, sixth at the Olympic Games in Seoul/COR in 1988 and winner of the North American World Cup League, is an offspring of Constant, who also took part in competitions. He produced a large number of international top horses. 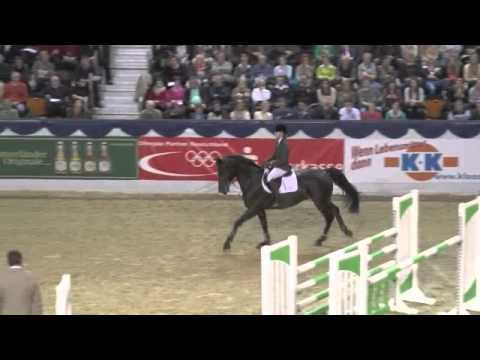